Do you know where the expression “cool as a cucumber comes from? It’s because cucumbers are typically 10 to 20 degrees cooler than the temperature around them. Try inserting a thermometer into one if you need a little proof. Not only do cucumbers have a cool temperature, but they’re also the key ingredient to some of the summer’s best cool down recipes.  There was a time when we only knew two main types of cucumbers – slicing and pickling. But things have changed and there is now a large variety of cucumber types available to gardeners and shoppers. They include Armenian, Diva, English Telegraph, Burpless, Persian, Lemon, Parisian Gherkins, Dasher, Sweet Success and Calypso varieties.
As fun as cucumbers are to grow, it’s their taste that keeps us planting them. Spring after spring, we continue to place them in the soil in anticipation of the delicious tastes they will bring to our tables. As far as recipes go, we have lots of old favorites but are always willing to try something new. We’ll share some of our favorites that you can try with you soon to be ripe crop. 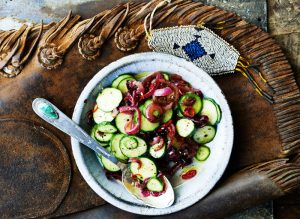 Prepare grill for medium-high heat. Combine chile and 2 Tbsp. vinegar in a small bowl; set aside.

Place onions on a rimmed baking sheet and drizzle with 2 Tbsp. oil; season with salt and pepper. Turn to coat. Grill onions directly on grate until lightly charred and softened, about 2 minutes per side. Transfer to a large bowl and toss with remaining 2 Tbsp. vinegar; let cool. 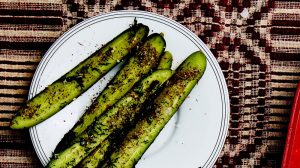 To serve, remove cucumber spears from brine, lightly shaking off excess liquid but leaving on any seasonings; sprinkle with za’atar and sea salt.

Do Ahead: Cucumber can be made 2 days ahead. Remove from brine (do not dry) and chill in an airtight container. 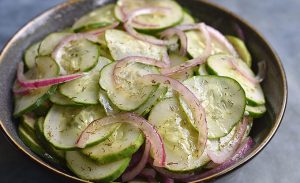 In a medium saucepan, bring the salt, vinegar, sugar, celery seed and vegetable oil to a boil, then remove the pan from the heat and allow to cool.
In a large bowl, toss the sliced cucumbers, onions and peppers with the liquid mixture and refrigerate for at least 2 hours and up to overnight. Serve cold.
If you’d like, add some salt and pepper and dill  and toss just before serving.
Before slicing the cucumbers, score the skins vertically with a fork, but do not peel them. Try Kirby or Persian cucumbers. They are smaller than regular cucumbers, and are very crunchy and mild in flavor. Perfect for salads!

Now, get out there and pick some cucumbers and try one of our favorite recipes, or make your favorite.